“There is no competition more intense than grown men throwing sacks at each other, hoping to hit painted panels of wood,” said Atlantic BT Front-End Developer Dave Dekker, “Just one man’s opinion.”

This opinion belonged to far more than one man, as more than 100 attendees gathered at Atlantic BT for our first ever Tech Toss cornhole competition. 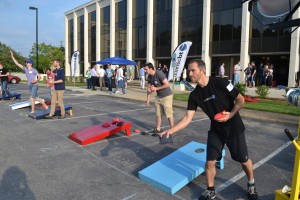 ABT Front-End Developer Dave Dekker prepares for a targeted toss.

From IBM to Durham-based startups like Industrial, tech companies across the Triangle sent representatives to compete for their chance to take home a trophy. Besides the 64 participants in the cornhole tournament, many others came to enjoy craft beer from regional breweries and some great food from the grill.

“As a former triathlete, I prefer carb-loading to cornhole,” said UI Designer Ricardo Cortes, “It’s really awesome to be part of a company that throws great parties where I can have a great time without hurling sacks of grain at my coworkers.”

With so many participants, the Tech Toss tournament had many close matches. Despite his confidence going into the tourney, Senior Marketing Analyst Kendall King was eliminated early. 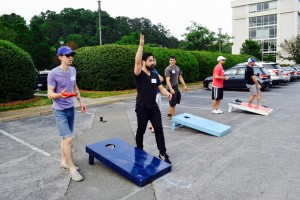 Not even this graceful toss technique could prevent Kendall’s early elimination.

“The sack falls where it falls. For me, that fall just wasn’t on the cornhole board,” Kendall said, “I’ll be back next time. Mark my words.”

As the competition intensified, the tossing continued past sundown. When only two teams remained, the skies darkened with rainclouds and the tournament moved indoors. The winning team would either be Atlantic BT’s Chris Duffy and Jeremy Wiggins, or Industrial’s Mark Nesbit and Joe Holthaus. 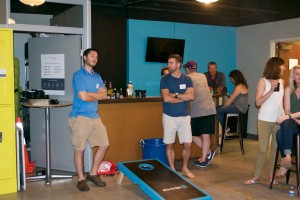 Mark Nesbit and Jeremy Wiggins each try to ignore the other’s intimidating gaze.

After a series of frenzied sack throwing, Industrial’s team took home the trophy for first place in the Atlantic BT Tech Toss. Duffy and Wiggins of Atlantic BT placed second, and another Industrial team composed of Christopher Lawrence and Jonathan Hodges came in third. 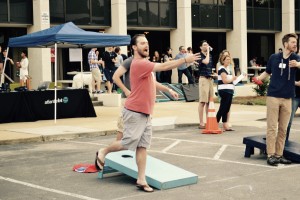 With a toss like this, how could Chris Duffy lose?

“No one at Atlantic BT ever plans to come in second, but I’m proud of how well Wiggins and I chucked those sacks. Even so, the real winners were definitely Band Together. They were the reason we competed in the first place,” Duffy said. 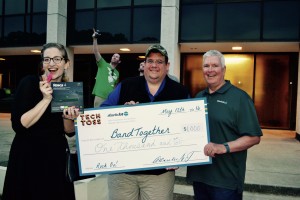 ABT President Don Lockwood presents the big check to Band Together.

As the Raleigh nonprofit benefited by Tech Toss, Band Together received $1,000 to aid in their local work to advance education and alleviate poverty. Atlantic BT has sponsored Band Together for numerous fundraisers in the past, and Tech Toss is just the latest instance of ABT supporting their projects.