What a Riot Looks Like on Amazon Web Services

As most of the world is aware, the past several days have been difficult ones in Baltimore. Following the funeral of Freddie Gray last Monday, a series of demonstrations quickly escalated into riots and looting in parts of the city. This is clearly one of the biggest events to impact the Baltimore region in many years and there is a tremendous thirst for news regarding the events. 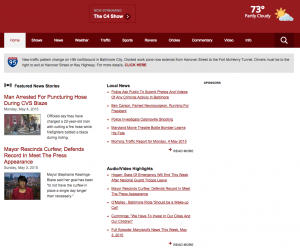 One of the less obvious results of a major news cycle is a huge spike in visitors on prominent news sites. Last Monday, demand on the leading Baltimore news station’s website has been tremendous. As the news station’s technology partner, Atlantic BT has been on alert monitoring the website to make certain that it continues to function at a high level.

What a Riot Looks Like on Amazon Web Services

The station’s website is hosted within the Amazon Web Services (AWS) environment. AWS is easily the most scalable and powerful web hosting environment and one that is an ideal fit for a heavily trafficked news site. But the past week has been extraordinary. Here’s a look at the volume of traffic and how much it has increased during the past several days:

On the far right of that graph, you see two significant spikes. During these timeframes, the site saw about 42,000 page views per hour, far greater than the normal traffic load on the site. For typical websites, a traffic spike like this could significantly slow down the site, possibly even forcing it to shut down. But this didn’t happen to this Baltimore news station. The following graph shows CPU usage in the AWS environment we constructed for the news station:

This graph shows how busy the computers are that send content to users. As you can see, despite a nearly 2,000% increase in usage of the site, CPU usage only increased by about 17% during the same timeframe. As a result, users never experienced a slowdown and they were able to get the news and information they needed.

Why Is the Voice of Baltimore News on Amazon Web Services?

Amazon Web Services proved to be the right environment to handle the new station’s largest online event in its history. And that’s saying a lot as the city (and the site) have experienced everything from the 2011 earthquake to significant snowstorms to the Baltimore Ravens playing in Super Bowl XLVII.

When the news station first approached Atlantic BT to handle its hosting needs, the site was set up using a single server in a data center. This was a standard configuration and one that would typically serve the news station’s site well for its regular traffic needs. But events like those noted above would drag the site down rendering it useless. The news station needed a better solution.

“[their] website is a critical part of their business. We wanted to create an environment that could handle high demand and keep the site online.”– Doug Eubanks, IT Manager, Atlantic BT

Atlantic BT recommended a move to AWS and architected a custom server configuration that focused on redundancy and making the site fault-tolerant. As Doug Eubanks, Atlantic BT’s manager of IT noted, “This Baltimore news station’s website is a critical part of their business. We wanted to create an environment that could handle high demand and keep the site online and what we developed is a solution that is both redundant and fault-tolerant.” The environment Atlantic BT constructed allows the servers to “heal” themselves when they experience periods of heavy demand. And that reduced the need for human intervention, which keeps the site moving along like normal regardless of how much traffic is on the site.

The news station’s newly architected environment was completed in April 2014, a full year before last week’s events in Baltimore. And the site has performed even better than expected during that time. In fact, the site has performed so well that the news station has not needed to reach out to Atlantic BT to address any issues with the site, something that would have been commonplace in its previous environment. And that has left the team at the Baltimore news station with more time to focus on their business during a critical time in the history of Baltimore.

Is Amazon Web Services Right For You?

Amazon Web Services is a solution for companies that place great emphasis on keeping their Websites and critical business applications up and running. As an Amazon Web Service Consulting Partner, Atlantic BT has helped many companies evaluate AWS to determine whether or not it is the right solution for them. Our team of AWS certified developers and engineers meet with each prospective client, review their specific situation and craft a custom solution to help them make a transition to AWS. If you are interested in exploring Amazon Web Services for your business needs or would like to learn more, give us a call at (919) 518-0670 or use our contact form to have an AWS consultant give you a call.

The Benefits of Outsourcing Your Web Development

Jon Karnofsky
Apr 30 - 8 minutes
Let's Dig Deeper. Explore all of our insights and get help to start a relationship with AtlanticBT
Explore Our Insights