Quenching the Thirst for Trivia: A Thirsty Thursday Recap

Questions were asked. Answers were given. Dreams were shattered, and a winner emerged.

“I was pretty sure my team was going to crush it,” said ABT Design Manager Corey Brinkmann, “But as soon as I learned the third round focused on 90s music, I knew we had it in the bag. My pop culture knowledge peaked in the Clinton era.” 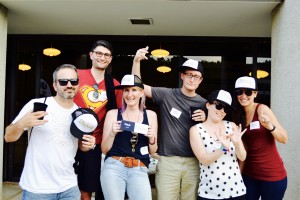 Winning team Believeland could not wait to don their ABT attire in celebration.

Corey’s team Believeland walked away with a home field victory for Atlantic BT. Other members of the winning team included Andrea Osborn, Josh Lockwood, Curtis Martin, Christine Martin, and Lauren Lockwood. In addition to the admiration of their friends and coworkers, Believeland won new Thirsty Thursday trucker hats and bags of ABT accessories.

Fresh off his runner-up finish in Tech Toss, ABT Application Architect Chris Duffy turned in another almost-heroic performance, as his team Show Me on the Doll came in third place overall.

Chris Duffy’s team had trouble differentiating the Shakespeare of rappers from actual Shakespeare.

“We were heading for a win, but that Tupac or Shakespeare round killed us.” Duffy said. “I guess that’s what we get for not having any English major rap experts on our team.”

Thirsty Thursday Trivia had four rounds, covering everything from famous drunks in world history to the college majors of elite athletes. Allan Maule, ABT Content Strategist and host of Trivia Night, wrote and delivered all the questions for the event. 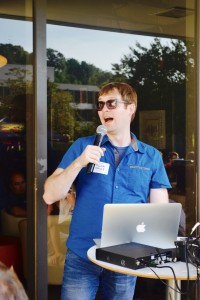 “My primary goal was to provide a good mix of challenge and fun with my questions so no crazed trivia taker charged the MC area. After all, trivia isn’t a contact sport.” Allan said. “The most important thing was that we crushed our fundraising goal for our two causes.”

The first Thirsty Thursday Trivia night raised more than $700 for the Molly Ann Gries Foundation and for the family of Lincoln King. This puts Atlantic BT well on its way toward the $3000 fundraising goal for all of the Thirsty Thursday events. 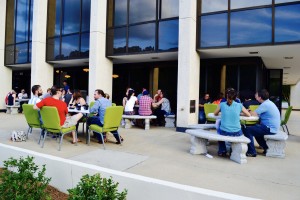 The Atlantic BT family braved a humid night to help those in need.

“We at ABT are blown away by the generosity and support of our community,” said Eileen Allen, VP of Experience and Strategy. “With five more Thirsty Thursdays to go, we’re so excited to see how much we can raise for these two charities that mean so much to the ABT family.”

The next Thirsty Thursday event will be the return of Tech Toss. This single-elimination cornhole tournament will be hosted at Atlantic BT on June 23. Be sure to check the Thirsty Thursday homepage for more details on this not-to-be-missed competition.