How do we turn Raleigh into a global design destination? That is—how can we, as creative professionals, help develop the creative community in the Triangle Area to the point that it’s recognized the world over?

After an extended holiday sabbatical, Crop hosted its first meetup of the year Tuesday to discuss just that. Hopscotch Design Director Marie Schacht put on a discussion workshop in Atlantic BT’s Level 1 lounge to explore what the future looks like for the broad collection of designers and creatives in the triangle area.

“We’re our strongest when we’re aligned and working together to solve a problem, whatever that problem is. It usually includes people from different backgrounds with different perspectives,” says Eileen Allen, VP of Experience and Strategy at ABT and Co-founder of Crop. “The goal of Crop is for us to reach out and give people from different disciplines the chance to talk with each other about design. With Hopscotch coming up, it seems like as good of a time as any.”

A Culture of Collaboration Affirms Its Rights

The meetup preluded the annual Hopscotch Design and Music Festivals that will take over downtown Raleigh September 8–10. With festival organizers synchronizing the two schedules to further integrate the music and design aspects, it made sense for ABT to host the event, as collaboration is cornerstone to the ABT business model.

“I rarely ever work on a project alone for very long at all,” remarked Corey Brinkmann, ABT’s Design Manager and the other Co-founder of Crop. “That’s why we try so hard to make ABT a place that can attract the best people. A collaborative culture is only as good as the people that make it up, but that model has the potential to be more than just the sum of its parts.”

Collaboration was also key to the workshop. About 25 people were divided into teams and then asked to draft a ‘design bill of rights’ that identified the liberties they consider most sacred as designers. 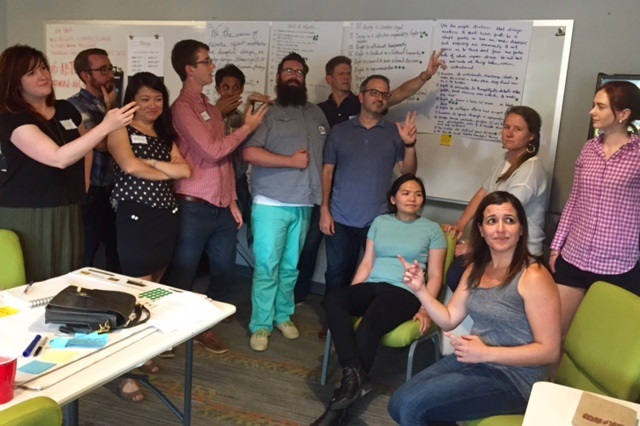 “We the people declare that design matters. It shall henceforth be a staple factor in how we make decisions and organize the community. We will hack life and make all things better, easier and intuitional,” read one such bill. “We the people will promote the freedom to collaborate, challenge ideas to make the world a better place… using thumb wars as an ultimate tie-breaker.”

“It’s good to do things like this as a group of designers to establish more ties to each other and to what we collectively think is important,” says Emily Davidson, Front-End Developer at ABT. “The more we collaborate with each other and talk about design, the stronger the community becomes.”

Davidson might not be completely impartial, however. While enjoying the complimentary catered dinner, she also won the raffle grand-prize—a ticket to the Hopscotch Design Festival.

“I always look forward to the festival,” Davidson said. “I always stumble onto great bands that I’ve never heard before and this year I’m finally going to be able to go to the design fest!”

Davidson later described Hopscotch as “a couple of really fun, slightly weird parties and of course, unlimited inspiration” to serve as a place to “discover the people designing the future.” The organizers of this music and design festival make it a point to try and appeal to designers from completely different backgrounds.

Hopscotch: Where the Creative and Functional Meet

Accordingly, this year’s Hopscotch features will include talks by bestselling author and CEO of Change Academy Dan Heath, as well as graphic designer and creative entrepreneur Tina Roth Eisenberg and many others.

Similarly, Crop is a meetup designed to bring creative individuals with various specialties together in order to practice crafting innovative solutions.

“Designing simple is very hard,” says Allen, who came up with Crop while having beers and talking shop with a coworker. “But I really believe that the power of design is that it can provide elegant solutions to complex problems. It’s about finding a creative solution with whatever you have available. To me that’s why I love design, it’s the intersection of creativity and functionality.”

Expect to see more events from Crop in the near future, and stay hydrated at Hopscotch.

Figma’s Remote Collaboration is the Future of Design Tools

Natalie Iannello
Apr 30 - 5 minutes
Let's Dig Deeper. Explore all of our insights and get help to start a relationship with AtlanticBT
Explore Our Insights